134980 - Goddess Andreea kaviar memories from the past

Goddess Andreea calls her slave and play with his body, teasing his hard cock, humiliate him and making him her ashtray. She knows how to enjoy a good time and she was training him for anything. She piss on him then she gives him some great turds right in his open wide mouth.She orders him to chew and swallow while he masturbates his huge cock with her shit. A nice huge brown cock recorded by Goddess.

The kinky couple decided to record more bizarre videos for all their fans ! In this clip, slave toy take care of his Goddess needs. He must make her cumm before she uses his mouth as receptacle for her shit! She obliges him to eat her shit and finger fuck her. Stay close to their movies.

In this clip, Mistress Alexandra wanted to destroy her slave and for that she tied him to the cross. Then she started to arouse him and then to give him many kicks in his balls and penis and to tie big weights to his scrotum. In the second part of the video, her friend wanted to poop in a new location and for that she chose the kitchen.

I held a big load of poo all day, saving it for the past couple days. IÂm wearing my brand new tight white leggings and let out a massive turd for you. I just have to smash it in between my cheeks. So smelly, squishy and warm. I hope you enjoy watching me as much as I enjoyed this poop.

Valeria shit is really absolute perfection! This big pile of shit is sweet and tasty - Valeria even shoves her shit in her mouth!! This is truly fantastic !!!

Mistress Roberta was in a great mood this morning. She was thinking to humiliate her toilet and she proposed him a task : if he can cumm while he eats her shit, he will escape from his chastity. Else, he will be severe punished and remains another 3 months in chastity with key at Mistress Roberta. She enjoys to abuse him and she pempty her bladder right into his mouth and then she fartings in his mouth and obliges him to remain with mouth wide open for her kaviar. She spurts a stinky diarrhea again and slave was not able to cum. Poor toilet ! 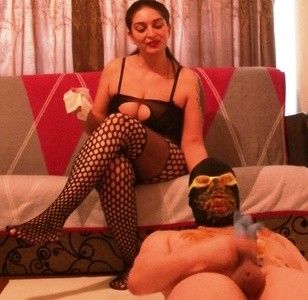 My son, I have to run out, I have a really important business meeting, will you bring me the deccolete? I know, I don't have panties under my pantyhose but then I'll explain .... listen, pee escapes me and poop too ... phew it's too late !!!!!Special pov to see, degenerate son and all in ITALIAN

Stupid bitch took my favourite scrunchie! Maybe it's crazy that I broke into her house to see if she had it, but it's only crazy if you're wrong right? And she did take it! She's owed a little revenge. My stuff is mine, and lying about it is deserving of a proper punishment.I pop my scrunchie on my wrist and strip off my dress. I've got my eye on the sink and a plan in my mind. I plug the drain and fill it up with water for the best effect. When I hop onto the countertop and fart a couple times onto the water, it bounces off a little echo-y and the stink is terrible. Perfect.I pee into the water and fart again then I start pushing. A big, hard, constipated shit begins to push out of my bum and I wiggle and adjust my ass until the big log drops and plops into the sink. Let's wipe! I make a pile of dirty toilet paper on the bathroom vanity counter. Yuck haha, the smell is awful but it's perfect.I don't feel done so I keep pushing and squeezing and get out another couple nice sized turds. Whew! I had so much backed up! I wipe more and more and it adds to the filthy pile of tissues. A nasty mess for a nasty friend. Good thing I'm not cleaning it up. Bye!

This video contains TWO CLIPS! In the first clip, Princess Millie SMOTHERS JIMMY under her big ass while using the Smotherbox! You get to see her FAT BOOTY completely crush his face! Princess B can be heard giggling in the background! In the second clip Millie feeds Jimmy a special treat! She so badly wanted to shit in his mouth, but couldn't hold it from the morning time... soooo SHE BROUGHT IT IN A TUPPERWARE CONTAINER! The shit was sitting in a plastic bag in her purse for 8 HOURS before being swallowed down Jimmy's throat! It's all wet and runny, both of them choke from the odor! This is a MESSY video and even Millie gets her hands dirty... VERY DIRTY!

Anna has invited you bakc to her house to have sex with you, you are both in the bedroom and you take your dress of and you are wearing black pantyhose, Anna takes of her t shirt, and bra and then her mini skirt, You look at her big white panties and although you dont say anything you are in a serious pain that she is wearing such unflattering panties, She gets on the bed and asks you to rub her first and then promises you the night of your life. You dont say anything again bit you are dissapoineted that she has left her black footsie socks on. You rub her for a couple of minutes and then she say in a bit of a panic a couple of times dont touch it, dont touch it, you stop rubbing her and it takes her a minute to compose herself , she then tells you to touch it agian and you start rubbbing her. Again afer a couple of minutes she is telling you in a panic not to touch it and you stop. Again she takes a minute to compose herself and then tells you to touch it again. This time it is only about a minute before she tells you not to touch it, you are now fed up with this and ignore her and continue to rub her she pleads with you to not touch it and you keep rubbing her and Anna has an expolosive climax and she also farts as she cums.The next scene is following you having slpt the night there after this dissapointing sex. You notice her purse on the side and you speak to yourself and say that after that shocking night this is the least she owes you. And you steal her money, Your phone goes and it is your freind Sue and you tell her about the intense night and that this women had panties on the size of Montanna, you hold them up as you discuss the size of her panties. and that she left her socks on as well, really sexy! You then tell her that you have heard of men with premature ejaculation issues but you didnt think it could happen to women until now and you tell her about how you rubbed her and then she asked you to stop until you got bored of it and she came and farted at the same time. Really sexy ! You then finsh the phone call and you have an idea. Anna was shit in bed so it is only fair that you shit in her bed so you pull your pantyhose down and take a shit on her bed while she is still asleep.

Squatting on my feet in my bathtub, I push out a log of shit. As I begin to pee I wink and spread my dirty asshole. A lovely gift for my toilet slaves. 😉

In the first part of the clip, Goddess Margo aroused her slut with her shoes and her sexy legs. She tied his cock and balls and wax them, then she enjoyed to destroy them under her heels. Then she announced him that he will remain on the floor and her ass in spandex catsuit will stay on his face and mouth, as long as she feel. In the last part of the clip, her friend pooped on the floor then she enjoyed a scat play, smearing her kaviar on her pussy. Kinky and bizarre scat romanian ladies!