1080 HD This clip is the second in the series, ÂWeekend Full Toilet Slave.Â In this clip, the slave is used for both piss and shit. The piss is shown from two camera angles. Both Angles are shown consecutively, then in a stacked picture in picture window. The shit is shown from three camera angles: front, back, and going into the slave from above. The three camera angles are also shown consecutively, then in a split-screen window. The shit section of this clip includes some written narration.On day two, I decided to pee into a container before shitting into the slave. I had noticed on day one that it was having some difficulty swallowing all of it. I donÂt like it when my shit sticks to the teeth. It should ALL go down. So, I decided to pee into a container first and then later use the pee to wash everything into the toilet slave. I shit and again, just like the first day, it was a lot. The toilet kept the shit in its mouth. It waits until IÂve finished before it swallows. I scooped all the errant bits and coaxed it all into the belly of my septic system. The toilet had a bit of retching this time. It was a pretty big load, so I understood the difficulty but did not let the toilet give up. Eventually, it all went down. I made it suck the shit off my fingers before allowing it the piss it so desperately wanted. ItÂs funny, I thought the piss would help the slave wash everything down, but interestingly it caused more retching. Of course, I didnÂt stop pouring. He still had to finish it all. The toilet was very good, eventually got it all down, and did not back up. I was pleased. I wondered, though, maybe he was having difficulty with the pee because there just wasnÂt enough of it. The toilet probably just needs MORE pee to help wash things down. I decided to give Kendall a call to see if sheÂd join me for day threeÂ (25:29 long)

Shot today, I was having a video call with a wanker slave at the first experiemze who immediately squirted like a donkey .... since I hadn't shit for two days I did this hard pov with lots of farting, spitting, pissing, shit a ball of considerable size ...,. now you buy it and you take your cock in your hand but you don't splash until I tell you, twenty minutes of delirium at the top!

I take the baby potty and start shitting in it. on top I still piss on shit. it turned out super porridge. everything stinks a lot. in the second part, I wear rubber boots and an apron. I'm standing. my ass is up high. legs open wide. my friend pours pear powder into my ass. Now I milk shit out of my ass. it's a super sight. 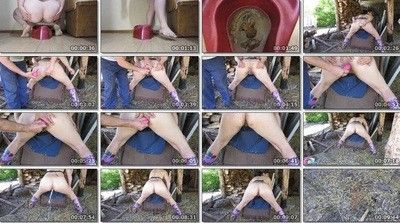 My friend Niffy love my farts smell and she begs me to allow her have the feelings of my poop on her boobs and she beg me to suck it with poop,which I did because she have a great natural boobs.

141134 - Dirtywife chewing her kaviar in her bathroom

Today Dirtywife went to sea. Eager to have fun and eat some kaviar, she called her husband to the bathroom and told him to film a new scene in which she would get dirty everywhere and chew her own shit. Great depraved romanian slut !!!

You are my addicted little toilet bitch and you will swallow everything i put in your mouth! Your place is underneath my toilet seat, i will use you whenever i have to take a shit!! Such an honor for you to lay under my ass and be allowed to have this perfect uncensored view! Of course i will use your tongue as my toilet paper!! And to make sure that there is no escape for you i will take a nice pic of you in this tasty situation so i can easily blackmail you to stay my toilet slave!!

Dirty Talk and Scat Instructions in English!Are you hungry for my shit? But just too far away to book a real session with me?Then this video is for you: I will explain to you, how you can receive my divine poop at your doorstep within 24 hours. The sight of my butt makes you so horny, that you canÂ´t wait for the mail man to arrive... Let me tease and dirty talk you into submission. Then I take your breath way, as I unload a huge shit into a gift box. Finally you receive the long-distance toilet training you dreamed of! In great detail, I will tell you, what you have to do with my huge load of brown gold.Poop mail orders can be placed now!

This is the second clip with Magdalena. We hope you like what she can do and you will help her to become more and more dirty. Another parts from her daily pooping, filmed alone. Lots of piss and shit for her fans!

After eating unusual food at over night party,I came home to rest ,but I started having stomach trouble,and it pressure me so much that I had to get up from bed and quickly poop it,with great moaning,pee,and poop,I also smeared it.

I mummified the slave so that he is completely helpless and submissive to my will. Film that wraps all over his body and bandages on his face except on the mouth. The mouth and the eyes are the only parts that interest me. He must see and must eat and drink. I provoke him with an old pink silk underwear and elegant heels. It's hard to believe that such a beautiful woman is about to do some rubbish. Yet, once the panties are off, I shit in his mouth. It is semi-liquid. He begins to enjoy it but also to have retching. I order him to swallow. The sight of my dirty ass helps him and that toilet mummy eats everything. Then I give him my nectar so that he can swallow even the last residue. Satisfied and lighter, I sit on the sofa telling him that even today he has done his duty as toilet.

Madam Tulpan in black high heels and black tight leggings squats and shits and pisses out simultaneously her liquidy shit and piss in a bowl. She pushes my face in her shit and piss, urging me to eat and sip. She uses fork to teach me to enjoy the taste of her shit.

I am lying on the couch in the room. I wear high heels and black stockings. I put an expansion glass in my ass. my ass is visible from the inside. you can clearly see the shit in the ass. my asshole is very dirty and smelly. I caress my clitoris. I love to play with my holes. 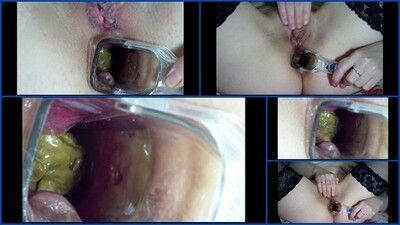 Very beautifull scat pov, all in ENGLISH LANGUAGE. I do it this morning when I get up, I begins to fart, I feel a lot of poo must EXIT from My Ass and you MUST take it and clean it! Useless slave, drink My Pee and eat My Spit!!!!

Hi guys! ItÂs Angelika Scat again and I just came back from work and had to poo again! I decide to do it on my glass table and I also put another camera below so you can see the poop coming out of my pretty asshole from beneath the glass, so awesome!!! After shitting I then show you my shitty assholeÂdonÂt you wish you could join at my scat tableÂ 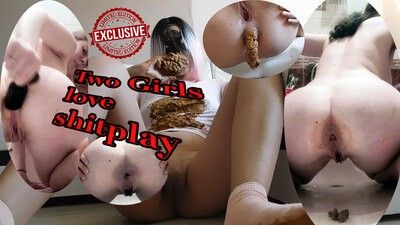 This is the first time when Magdalena appears in dirty clips. We hope you like what she can do and become more and more kinky and dirty. For a start, some sequences that she filmed alone during the last 3 weeks. Lots of piss and shit for her fans!

Mistress Anita returned to filming. If you like to see the most kinky domina in Romania, you can only watch her in our store. Today she humiliated her slave Faith and made him smell her yellow panties he had brought as a gift. Then she sat on his face with her pussy and ass and suffocated him, making him hold his breath and worship her intimacy. In the end, she did another trampling and beat him with a whip everywhere.Â Then she filmed the next scene with 3 cameras, to better capture all the moments of the full toilet scenes. She made Faith lie on the floor and start licking her pussy. Then she told him to keep his mouth wide open and swallow all her piss. Subsequently, a huge diarrhea followed directly into the slave's mouth and face and she ordered him to stick his tongue deep in her anus and remove everything left. An epic clip, filmed from 3 different angles.