All this time, this man thought that he is creating good rapport among his constituents, but little does he know, they are simply taking advantage of his kindness! When they have led him to believe that they are his friends, these three dominatrixes proceed to catch him off guard and torment him to their liking!They strip off his clothes and throw him on the floor in one of the offices where nobody can hear him! After which, one of the women squats on top of his face and urinates into his mouth! When she is finished, she ****** feeds him with her pussy, leaving him with no choice but to lick and devour her dirty vagina! While she is busy doing so, another woman is whipping all over the guy! Eventually, a different woman steps up and smothers him with her pussy! She then torments him with her whip while positioning him into a seat-like contraption! She gets on top of it and then begins defecating, shooting her poop into the guyÂs mouth! This leaves him with no choice but to chew and swallow! She manages to release a long stream of poop which takes all the guyÂs strength to consume! After which, she smothers him with her butt, ****** him to lick her asshole clean! When she is finished, a different dominatrix takes her turn and does the same thing! She poops into the guyÂs mouth and he is left with no choice but to chew and eat everything!When she is finished, the women proceed with their next torment! They take turns whipping his body as well as peeing into a small container! After filling it up, they poor it into the manÂs mouth for him to drink! They make sure to have him gulp down every drop, and when he is successful, they proceed to subject him to more pain and suffering with the whip until he is completely exhausted and defeated!

Hello my beloved slaves, I know how much you love my giant Goddess asshole, I took a laxative, shit a huge, thick shit into a bowl, and measured the inside temperature of my ass, and after flaunting my dirty ass I spilled the shit in the toilet and flushed but the skid marks were left behind, after that my ass was still tense so I stuck my fingers open and my ass leaving it very coarse and swollen, my hemorrhoids bounced out and i know you wanted to suck it all.Another clip of 2019

Blackcat was very kinky today. She wanted to humiliate both of her slaves and for that she fed them both her delicious shit, making them fuck and kiss passionately in front of her. Perfect scat feeding clip with a bizarre romanian Domme

Watch as I push my butt plug in and out of my arse! I pop out the butt plug and poop in the bathroom. I show you the big pile of poop IÂve made in my bath! What a naughty, delicious mess IÂve made!!

This time and only you and me, in the bathroom, I squat down, I was in the mood to shit, and my ass opening comes out a huge shit, imagine everything in your mouth, eating, smelling my shit, watch me spread shit all over mine body, privileged view you have, watching her play with beautiful shit, in the end, you can watch her queen bath

New SUMMER 2022 Series. Episode 1The summer is here again and my best toilet slave will eat my shit all month! Of course, I starve him for 1 day and now he is hungry for my huge logs. He worships my new shoes and my feet, kisses them smells them while I am drinking my coffee and waiting for my shit to come down. He is my ashtray too. In the end, I feed him with big fat brown shit directly in his mouth, the shit came so fast that he miss some on the floor, but I ****** all the shit in his mouth with a spoon. Now I am sure he is not hungry anymore... but Tomorrow I am going to use him again haha this is his fate , HE HAS TO EAT ALL!

157190 - Neighbor pissed and shit on me as I took a sunbathing! Uncut Version

When I was naked by the sun, my neighbor came on the roof terrace and pissed on me. I was totally puzzled. Then he sat on my face with his ass and I had to lick his asshole. But not enough, suddenly he started to shit and he shitting me on my tits. Then he rubbed his shit on my body and lubricated me full. I almost had to throw up and choked up, so it stunk. So I had to blow him a blow! Then he left me in the sun and said that would be the best sunscreen for me!

From the stomping, the dominatrix lays the guy on the floor again, but this time, she sits on his face and smothers him with her pussy! She ****** feeds him so hard that he is finding it difficult to breathe, but she only rubs harder and more aggressively with every passing second!Eventually, the woman bends over and orders the guy to eat her asshole, which he immediately complies! As she enjoys it even more, she later sits on his face with her asshole directly on his mouth! While he is busy orally pleasuring her, she is concentrating with defecating on him! As a result, she later poops directly into his mouth, leaving him unable to resist and with no choice but to catch every chunk of poop, chew everything, and swallow all of it down against his will!

Lyndra Lynn found a massive mud lake, she loves mud and also cow manure. So she brought a bucket with her to have some real dirty fun. First Lyndra covers herself with the creamy mud. She smears it on her Leggings and her top. After her clothes are covered, she undresses to cover herself even more. She smears the creamy mud on her whole body and covers every inch of it. Now sheÂs only in her underwear and lays back to lay out a big stream of pee. She begins to grab some cow dung to mix it with the mud on her body. She smears it on her boobs and her face, which turns her on more and more. Now her whole body is covered in mud and manure, so she grabs her lube and her toy. But before that she just needs to let a nice fart rip from her tight asshole. She lubes up her pussy and starts to fuck herself with the dildo in different position. She gets so turned on by all of this mess till she reaches a heavy climax. Right after that she grabs the bucket to pour the remaining cow dung over her head and body.

After his first mud and manure trip, Franky wanted the combination again. The creamy mud together with the also creamy but stinky cow dung is just the best from both worlds. He found a large really creamy mud lake and brought some cow manure with him. He first starts to explore the mud lake by wandering around in it. He then starts to cover himself with the creamy yellow brownish mud. He gets back to his starting point, because now itÂs time for some toys and the cow dung. He lubes up his asshole and stretches it with his fingers. After that he inserts the inflatable anal plug and starts pumping it. He jerks off in various positions while covering himself with the creamy manure till he reaches a nice orgasm.

I was just wandering around till I found that nice lake of mud. My dirty mind was instantly drawn to it, so I grabbed some of my toys and got back there. I jump in the yellow brownish mud with my feet first and got a bit stuck there. I dug my leg out and crawled around in the mud to find a nice creamy and deep spot. I made sure to grab my toy and my lube as IÂve found the perfect spot. I begin to cover myself with the mud. I undress a bit so IÂm just in my bikini. I play around in the mud and cover myself even more with it, till IÂm so horny I canÂt wait any longer. I grab my toy and slide my panty aside to stark fucking my dripping wet pussy. It doesnÂt take long till I reach a wild orgasm. After that I undress completely and play around in the mud even more. 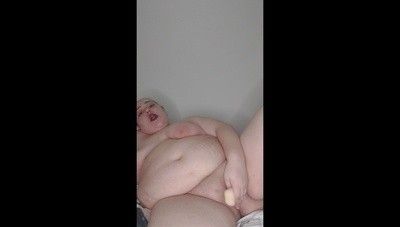 Catwoman Lyndra was in the cowshed and discovered something interesting while exploring. She began to play with the manure, first with her hands then she dipped her legs in. This made her want to climb into the manure pit in her tight suit. It was very fresh, but that did not stop Lyndra from enjoying the moment in the creamy slurry. She smeared it on her breasts, but that was not enough for her. She took off her suit and covered her chest in it. She wanted to feel the sensation on her breasts, so she took off her bra and massaged her breasts with cow dung. This fresh cool and the amazing feeling of being in the channel made her very horny. She got out and also covered her ass with it. But there was something else, the fuck machine was also still there. With pleasure Lyndra licked and sucked on it and got ready to use it. First slowly and then faster and faster. She moaned loudly because it felt so good. But Catwoman Lyndra was still too clean, she climbed into the manure channel again and submerged completely.

Well, I don't have much to say about this video, it's been a long time since I wanted to make a video like this, dirty, hot and with a lot of shit, I really opened my ass to put all this shit and spread it, if you like one big ass, thick and dirty with shit, this video is perfect for you, it is subtitled in English and has many instructions and instructions for you to smell, lick, kiss and adore, these images already say for themselves.