Hello Mr. Slave! Today my fantasy played out ******ly and I imagined that it was your penis. I decided to draw him on a piece of paper and play around, and then shit on him!

After work is done in the stable, the two sweet girlfriends have finally taken the time to deal in detail with the leftovers of their animal workmates.In addition to sensual mutual rubbing, they also enjoy their naked bodies in the large amount of dung.It does not take long until the craving is high enough to have sex while their bodies are covered in horse dung.After an extended licking session in their favorite position 69, they turn their attention to their toys and of course their wet holes.Niko and Di visibly enjoy their new hobby and live out their dirty lesbian fun to the climax.

My first video with my waste. IÂve always wanted to play with it, but I always was too shy to try it out. Untill now. I shit in the bowl, after that I take it out and smear it all over my friends body. After IÂm done with smearing I turn around and ride him in cowgirl, while he smears some shit on me and on his own body. After the riding I slide back so he can finger my beautiful tight pussy. At this point IÂm soaking wet, so we switch to doggystyle where he fucks me really good and also covers my ass completely with my waste, he shoots his load all over my tight and cute asshole.

Similar to my other bathtub vids, I piss and push out a big shit off foreground in my bathtub. 😉 I show my shit pile and smear it on mu pussy and asshole. Enjoy! 😉

This slave is slow in both movement and understanding. And once my friend Gaia undoes his panties I discover that he is hypodotized too. What a slave shit! And just because he sucks he stimulated me and now I run away from shitting. I will show him all the contempt I feel for him by filling his mouth. I undo my panties in a sensual way and crouch over him. Comes out soft. When I'm done I order him to clean me up with his finger and with that same dirty finger Gaia and I order him to get a shitty lipstick. Reached this degradation, mocking him, we send him away so now he is useless.

It is time for my shit eaters new lesson! Today he is allowed to lay under my toilet chair for the first time. What a perfect view for him and a perfect big load right in and on his mouth! Of course i want him to eat every bit of my delicious shit but he is trying to get out of the situation without swallowing at all. I really really dont like that and his behavior actually gets me kind of angry. So i am ****** him into a shit swallow countdown without any way out!!

|*BP Exclusive*| - As promised, enjoy the second video of Giulia. In this clip you can see how a such tiny girl can shit a huge load of poop. She squats from the rear view, with a great view of her swollen asshole (and barefeet) and shits a long, huge soft turd on a paper towel in her bathroom. You can also hear her moaning a bit while pushing out the brown monster. The pile is massive and it has a delicious texture and color. This clip is amazing, Giulia is amazing. Must see it! [1:06 mins] 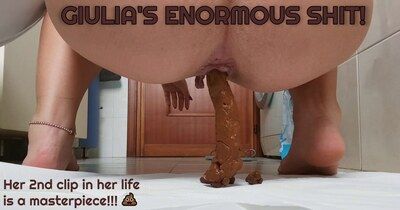 I wanted to check on my pig, because I didnÂt see him for some time. I checked everywhere till I heard a noise from the bathroom. I opened the door a little to see what heÂs doing. That filthy shit was trying to have fun without permission. He picked up some used panties of mine and pooped in them. He started to smear and jerk off his cock with his poop. ThatÂs where I burst in and interrupted him. He isnÂt allowed to have fun without my permission. I grab him and put on his collar and handcuffs, because now I want to have fun and he needs a little reminder.I pull down his panties and stuff the full and creamy panties in his mouth. After that I start to roughly fuck him with a metal dildo and slap him with my riding crop.I get a bowl full of milk and a syringe, because now the dirty pig gets a milk enema. I fill his ass with milk and stuff some marshmallows in it too, because they act as a real good laxative. Now heÂs allowed to push everything out back in the bowl. But the stupid fuck has so much pressure he makes a complete mess in the Bathroom. So I poured everything from the bowl on his face. After that he deserves only one thing and thatÂs an ice cold shower.

A clip for all penny-pinchers who can't afford the full scat educations but still dream of being pissed and shit on.Worship my divine body in white and start jerking under my instruction! I tease you in white patent leather boots and my white catsuit ouvert.Imagine being the toilet bow, when I piss. And jerk off, while I tell you, how I will teach you to eat my shit. 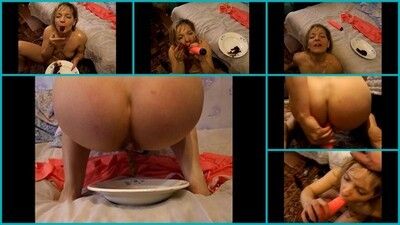 He will eat all Everybody needs air, in order to live. The same goes for slaves as well, but because I am a merciful Goddess the air I provide my servant is way better than the natural air. You would not believe that by his moanings and pleads, but the truth is that this is what he craves. Even though it repulses him, it arouses him just as much. Even if he begs me to not shit in his mouth, he obeys in order to make me, his Goddess happy. I really tease him throughout the entire clip, giving him just a tease for whan he is about to be made to consume. I don't even get affected by all my farts, because I've trained him to consume them really well, so that I can chill on my phone without the foul smell. Either by containing them in his mouth, or quickly ingesting them through his nose, I demand that every gas that comes from me is to be inhaled. But enough of me being so nice, duties are not to be forgotten. I require lubrication of my asshole, and a place to shit a.k.a. my slaves mouth. After I've pushed it down I suffocate him with all my weight, to make sure he recieves no air, other than the smell of my shit, ass, and farts. He lives breathing from my waste, he lives because of the air I've provided.

Softcore video, no scat shown. With my latest read in hand and showing off my luxurious satin lingerie, I'm rushing to the bathroom again! With my entertainment in hand, I'll tell you all about this fascinating new sci fi book I'm reading.