Look at what I bought honey! You know why I got this potty chair right? WellÂ I discovered everything about your sick fetish. At first I wanted to just pack my things and go. But then I saw a way to take advantage of this.SeeÂ IÂve always wanted to change my carreer and now I found what I want to do! You and I are going to work together. You are gonna become the biggest toilet slave in town! IÂm going to bring you from house to house so woman can shit on your face after a long and frustrating day of work! Is there a better way to have fun? I donÂt think so! This is going to be so popular, there will be a huge demand for this service.LetÂs waste no time and do it! IÂm going to shit on your face right here, right now! DonÂt try to escape, you are gonna become my toilet and I dont care if you feel ready or not. Just look at my perfect assÂ donÂt you wanna eat whatÂs gonna come out of it? Your dick is hard and the hornier you become, the more you desire my warm shit!Come here so I can shit and piss on your face! Lick everything clean now! From now on consider yourself as my personal toilet. I will never call you my husband again! Get ready to eat a lot more shit and piss!!*Close up of my poop at the end of the video.

ENGLISH SPEAKINGCUSTOM REQUEST - Your slave is under the cock box, and you are wearing your black rubber Hunter Boots. You show him that youÂre not wearing panties and tease him by showing your pussy, but remind him heÂs not good enough to touch it. His only use is as your waste basket. To humiliate him, you trample his cock under your boots a bit before taking a crap on his cock. Then squash it under your boots. Humiliating him even more, you start jerking his scat covered cock under your boots. Once the slave cums, you step in the mixture and show him the mess he made...

Mistress Luna recorded today another kinky and bizarre clip. in the first part the 3 Goddesses humiliate their slave, tied his cock and balls very tight. They begin to humiliate him verbally and physically, spitting on him, slapping him and obliged him to carry out various commands/tasks. They obliged him also to accept a cock pump to destroy his cock and mouth, spanking his balls, scratching or cock slapping with hands. In the second part, Mistress Luna goes to bathroom and making him her personal toilet. She fills a glass with her piss and obliged him to drink it and smear it on his face and head. In the third part, their friend was alone at home. She expulses a big turd on the floor and then she gets a dildo and fucks her dirty ass with her shit on it. She smears her shit on her big tits and also lick her kaviar from her hands.

Another epic feeding clip with Master Mike and his human toilet boy. TODAY Master Mike wanted to have a special clip with coerced feeding. He oblige his slut to take it deep in his asshole, then to sauck his cock and eat his own shit. Slave must worship his dirty cock, suck his dirty shitty cock and then began to whip him. part 1

This scene was shot a few months ago and it was one of the worst poop that I had. It was hard as rock and very large. You can see me struggle, suffer, push really hard and moan. My thigh little butthole gets really large but I still canÂt get this rock hard shit out of my body. Sometimes I was using my fingers to help. At times I thought that this would never end and my poop would remain forever in my asshole! It was almost like giving birth! My friend was sitting on a chair watching me all that time and he was really sorry for me. He had never seen hard shit like this before. He wanted me to go to the doctor. At the end of the clip I say some words in French: ÂHave you seen the width of this?? All that struggle only for this?Â*Close-up of my poop at the end of the video.* Find more scat videos on DirtyMaryan.com *

I am sat on the toilet having a poo unaware that you are spying on me and getting turned on. I spot you and I am VERY angry. I tell you how perverted you are for watching me take a shit and accuse you of being a deviant. I tell you if you want to get up close and personal with my shit you can and instruct you to look closely at my poop down the toilet bowl. I then show you my shitty ass and wipe my ass with some white cotton panties. I realise this is just turning you on and I become even more angry.You must be punished. Cut to the next scene. I toss you the shitty panties and instruct you to use them to jerk off in front of me whilst I tease and humiliate you for being such a pervert. I play with my pussy, turned on by mocking you, whilst I give you JOI. I tell you when you can cum over the shitty panties.To finish i hold the panties up the camera and tell you to lick them clean until they are spotless.

here are a few parts. I wear a raincoat and rubber boots. I really want to shit. I'm starting to shit right in the raincoat. shit in the asshole is seen close up. I smear shit on my body and raincoat. I'm stomping on shit with my big ezin boots. It's just super. 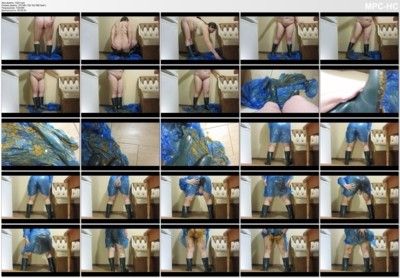 Mel is a 19 y.o. asian (mixed Chinese/Japanese) girl with a great ass and wonderful soft feet. But her strength is her shit. You can't believe of how much soft, runny shit can release this tiny teen. Huge loads on the floor, pissing, some farts and lots of barefeet view from several angles (amazing clip where she shits all over her smooth soles). Great bonus clip in the end with an enormous fat turd coming out her delicious asshole, right in your face. Oh...and don't miss the amazing sound of her shit when she comes out. Turn the volume up!!! [5:57 mins]

Goddess Andreea continue her dirty play with her personal toilets. She humiliates them more today with hosiery, foot fetish and full toilet slavery : she puts one of her toilets to record the action while feeding the other. Toilet was laid on the floor and he was waiting for his fate : to be just a receptacle for his Goddess shit.She ordered him to wank hard and stroke his pathetic cock while she was shitting and pissing in his open wide mouth. She was dressed in a black seethrough catsuit today and high heels.

Early in the morning and this schoolgirl is having an aching stomach! So, she heads straight to the infirmary to get some along time and rest! However, while sitting on a couch, her condition gets a lot worse! Before long, she could no longer stop herself from puking! Holding on to a plastic basin, she catches every last drop of uncontrollable vomit on to it! Eventually, she feels a slight sense of relief and proceeds to lie down to get some real rest, but before long, her stomach starts acting up again! This time, it is her ass that takes the toll! She feels the uncontrollable urge to defecate and she does her best to keep it in, but despite her efforts, feces start leaking out of her asshole and begins soaking her panties! Eventually, she finally gives up and bursts out all the contents of her rectum, resulting on a mess on the couch! When she could no longer release any more, she gets up and leaves the place completely filthy and messy!

I look forward seeing you. YouÂll eat my shit every morning. And I shit a lot, every day, even several times a day. Shit will flow out of my ass and fall right into your mouth. And then youÂll be licking my ass clean. IÂm going step in the shit on purpose and youÂre going lick soles of my shoes. YouÂre nothing, my toy, my toilet bowl

had rice porridge for Breakfast this morning.And in the evening I went to relieve myself, but alas, I could not give out a large portion of shit.After all, the reason for everything is constipation!And the whole incident is to blame,Rhys!So you went without dinner tonight,but still, three little pea-sized poop, a little dinner for you!Bon Appetit!

ANOTHER DIRTY clip with Goddess Roberta!! Today she released her slave from chastity, only to humiliate him more. She spit in his mouth and laugh on his small cock. She puts him under her throne, and pissing and shitting a nice diarrhea directly into his throat ! She obliges him also to smear her diarrhea all over his body and stroke his pathetic clitty for her dirty pleasures !! She was dressing today in a seethrough catsuit, crotchless and her ass was divine !! She is one of the best bizarre Goddesses from Romania and she know how to use a pathetic slave and make him a loyal full toilet slave. 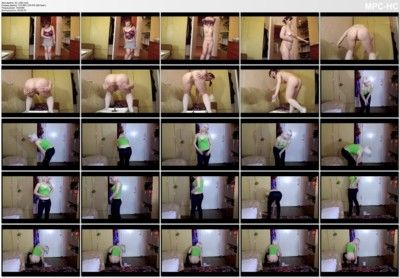