You know where you belong, down on the floor just waiting to make my dirty asshole nice and clean with your tongue.Each time I have to use the toilet, you will be there patiently waiting to fulfill your cleanup duty of my ass.You will be cleaning up after a monthÂs worth of messy, super long, noisy and smelly shits.You love being my toilet slave, itÂs what you live for.Get your mouth ready and serve me.

Do you like delicious poop that smoothly crawls out of an excited female asshole?Do you want to look on my back slit pink briefs, walk your gaze along my cute asshole, watch my dirty ass while I shit from the exciting pushing of tight fresh shit, huh?I do an incredibly dirty, humble but incredibly hot show! That smelly shit lies on the floor, maybe you want to lick it?YouÂre going to get a whole bunch of fragrant shit today! 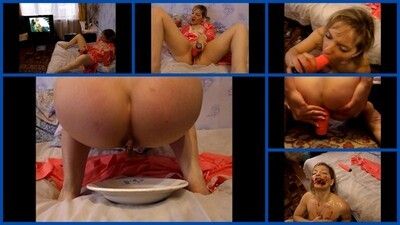 a long session of my step-mother on the toilet... she does everything, she had a bloated belly and she lets out pee, farts and...she didn't know she was being filmed with even 2 hidden hd cams, so you can admire the front and back, the expressions on her face and what happens to her holes as she frees herself.I suggest you buy it now, before my step-mother notices.

At this point, the woman finally gets up from sitting all over the mounds of feces! She then slowly takes off her filthy lower garments that are completely drenched with her wet and solid poop! She takes her time observing her own filth which are spread all over the place! When that sight doesnÂt content you, see everything again, only this time, from different angles! See how poop leaked out of her underwear as well as a camera placed just underneath her chair!

I am a beautiful 30-year-old j-woman, tanned, beautiful buttocks andA nice flexible and open assholeI'm a slut and I like to poopI shit on a plate see you my asshole openI push for 8 minutes my asshole opens, it's nice to seeAnd the shit come out, she is very stinky and oilyYou want my shit to whoever watches the video

I have eaten very badly last day. My stomach hurt at this. This morning I felt that I was very full. I went to the window and I decided to feed you. Open your mouth. Your breakfast is on the windowsill. ItÂs warm and stinky. Mmmm. Bon Appetit!

In this last clip from the series with Kytana and Gyulia, Mistress Kytana and Gyulia humiliated their slave and fucked him twice with their huge strapons in his ass. They changed various positions and destroyed his mouth and ass at the same time. In the end, they sent him to their friend to humiliate him and make a CEI at the end. Then she made diarrhea in his mouth and made him swallow.

The punishment of my worst employee is not over yet. It is not enough to use him as a serial sniffer of sweaty feet, it is not enough to use the tongue to lick my high heels: now he will follow me into the bathroom and do his duties from his toilet. Then of course he goes back to billing for the company as if nothing had happened, because he only deserves to be used and laughed at!

IT SEEMS that the wait is over. Mistress Anita has returned to filming. The most awaited return of a Romanian scat Goddess who loves to make her toilet slaves eat all her divine shit happened today. After about a year and a half break, Mistress Anita recorded a new clip with her diarrhea, as in the good old days. From today script : Mistress appeared only in a transparent black robe, with black panties with transparent red. She waited for her shitty slave to come and feed him. After a long wait in which he missed his mistress, he thanked her for thinking of him to be the lucky shit eater of her first kaviar. But, the surprise: it was a huge diarrhea, which filled his mouth and made him choke, trying to swallow it as all the slave toilets of the Mistress Anita must do ! You can also see how Mistress let the slave lick her vagina through her panties and how she made fun of him, making him drink her piss directly from her pussy, through her panties. Then she made him dry her panties with his tongue and suck on her piss, to be sure that it would stay with her taste in his stomach for a long time. Along with a few scenes of adoration of the feet, of the shoes with high heels and some beating, otherwise you can see how the mistress expels WITH power ALL HER DIARRHEA directly into the hungry mouth of the toilet slut. A perfect movie, as your Mistress Anita has been accustomed to for the last 6 years !

The punishment of my worst employee is not over yet. It is not enough to use him as a serial sniffer of sweaty feet, it is not enough to use the tongue to lick my high heels: now he will follow me into the bathroom and do his duties from his toilet. Then of course he goes back to billing for the company as if nothing had happened, because he only deserves to be used and laughed at!

Starting today, during 5 episodes/clips, we will present you the new videos of Mistress Andreea. This time made with Mister Faith and a professional cameraman. You will notice a completely different style and some special footage. All 5 videos were made in the attic. In the first clip, Mistress Andreea brings her slave on a leash in the attic. She starts to excite him with her body and then she puts him in the metal cage and locks him in her. She suspends him and starts smoking, ordering him to masturbate and at the same time be a human ashtray for her. A great clip for smoking, JOI and foot fetish lovers! In the second part of the video, her mature friend has excellent diarrhea filmed in close up by her husband.

Today I want to be dirty, dirty and depraved. Look at all shit around, perfect for my dirty games today. Umm... such a huge cock, I want feel it inside. More, more shit on him instead of lube. Oh, yes, how wonderful he slides, deeper and deeper inside me. Perfect day, real bliss

This time, my bathroom slave was a beautiful doll. I got home and sat on the silent couch and started to let go of all the farts I had saved because I was at work, so I started to let go and started to sweat, feeling like I was about to drop my chocolate, when I came across the doll on the floor in the corridor of my apartment and I decided to make fun of him, I bent down and laughing I started farting in her face, I took her to the room and put it inside my pink hippo (potty), and I continued to make the doll I felt my fart , I even felt that something was going to come out, I put my ass on top of the doll and threw a beautiful chocolate on top of it and inside the potty. A beautiful woman in her intimate moment, playing with her doll. Video solo.

It has been a while since this woman has defecated, so in this situation, she finally gets some help! Wearing only her shirt and panties, she is given an enema to trigger her rectum! Before long, she starts defecating into her underwear! With every passing second, it gets filled with even more poop and later, starts leaking out of her garments! Just below her buttocks is a chair which ends up getting dripped with poop as the situation progresses! Shortly after, there is a significant amount of feces on it and she sits on the mound of filth, consequently creating a much bigger mess! The guy who helped her then joins in by smearing feces all over her thighs! It doesnÂt last long though as she then gets up and takes off her filthy lower garments! They are completely drenched with her wet and solid poop!

I almost pass out when the hard poo was coming ,it pains and hurt so much before I could poo it,then came the soft huge ones with ****** after pushing the hard one out