Yana Alice and Karolina this time decided to fill their underpants with shit and urine . First of the video, the girls show you their white panties , after showing the panties , the girls take turns Baring their Asses and showing them to you, they have white clean ones . Then the girls take turns shitting and pissing in their underpants filling them with shit and urine, then the girls pull down their panties to show you their dirty ass and panties .

In the middle of the night, this man comes home from work and he is under a lot of stress and exhaustion, so he is not going to allow that his arousal doesnÂt get quenched! So, with his girlfriend already in the middle of her sleep, he takes off her clothes and then begins getting intimate with her! He kisses her on the lips before directing his attention on her asshole which he licks to his heartÂs content! By then, he puts a cup underneath her pussy and makes her urinate inside of it which he is then fast to drink! However, that isnÂt the end of it, he continues to pleasure himself with her piss by having her urinate directly into his mouth! When she could no longer release any more, he dives his face on her crotch and gets busy devouring her vagina! While he is busy doing so, she is made to defecate, consequently creating a huge mess, both on herself and on the guy! He then later concentrates his attention on finger fucking her asshole until she could no longer release any more poop! By then, he gets back to making her pee on his face on into his mouth until again, she could no longer release any more!

I really soiled myself in this one. Yes it started out as an innocent farting video but by the sound of those wet farts you can hear that shitty trouble is coming. I take my jeans off but my panties on and I keep on farting. DoesnÂt take too long before I can feel my asshole is getting that wet and hot feeling along with the cramps.Instead of running for the toilet I decide to mess myself, just for you! You are in for a treat because the previous day IÂve eaten a massive meal. To make things more interesting is the fact that these are white cotton panties. Watch as I ruin these panties for good by taking a MASSIVE and EXPLOSIVE shit right in them in full view for you! It was simply too massive to be contained and you can literally see my shit leaking down my own legs. The thick and firmer turds got trapped in my panties as they slid out and I show you all the amazing detail in my ruined panties afterwards.There arenÂt that many girls like me whom like to shit themselves and talk about it but I get very turned on knowing you guys are watching me making these nasty messes. I also show you extreme close-ups of my shit covered bottom and dirty puckering asshole xoxo

My dear.... I poo every day but I'm so busy and i do not film my beautifill poo! This is ALL IN ENGLISH for my Yezz's fans. I'm spending my time with my cows, MILKING THEM..... I dedicated this videoclip to my actual best cow, Cris, and at my old best cow, Markus. They will understand seeing this clip!Cows like POO!!!

The woman continues getting pleasured and relaxed, so much that she couldnÂt help but moan throughout the entire duration of the situation! However, as she enjoys it even more, she doesnÂt realize it but she unintentionally starts defecating! She releases one stream of feces after another, and before long, she even bends over to make it easier for her to poop, only being able to stop when her rectum is rendered completely empty!

New Year means I'm coming back from Canada where I spend my holidays on a busy schedule of seeing friends and family and a strict diet of cheese, chocolate and Christmas cocktails! Starting off with something simple, I show off my butt and feet in the classic 'holes and soles' pose and starting to push out a very big VERY unique shit! It's creamy in parts yet HUGELY thick and hard in other parts. The creamy sit has lubed up the big hard turds causing them to shoot out of my stretched asshole and make loud heavy THUDS on the ground. I show the pooping, butt wiggles and toe scrunching again, closer up.I examine and describe the poop (wearing a glove unfortunately since I had to run off to a work event right after) and pull out all the big hard pieces like mining for gold nuggets in a river of creamy poop!

Yana Alice and Caroline decided to play obedient dogs, Alice became the owner of dogs . First, Alice takes turns walking the dogs on a leash, showing you their Asses, pussies, and Tits . Then mistress Alice puts an iron dog bowl on the floor and orders the dogs Jan and Caroline to fill them with shit , the dogs obediently follow the orders of the mistress . After Yana and Karolina had filled an iron dog bowl with shit and urine, they took turns putting their faces in it and drinking some of the urine . After that, Alice went to the iron dog bowl and now the bowl is full of urine and shit . But this is not enough for Alice, Alice orders two whores to open their mouths and Alice shoots urine with shit first into Caroline's mouth and then the remaining shit into Yana's mouth , brown trickles run down the bodies of two toilet slaves . Yana's mouth is full of shit, and Karolina licks Yana while helping her sit down . Mistress Alice was satisfied that her two dogs are the best toilet slaves .

My stomach is full of shit. I want to get rid of it. I can not stand it any longer. My toilet is closed. I'm starting to shit right into her new white shorts. With my ass and shit to be a powerful stream. I'm fine I'm happy with the result. Good Appetite. 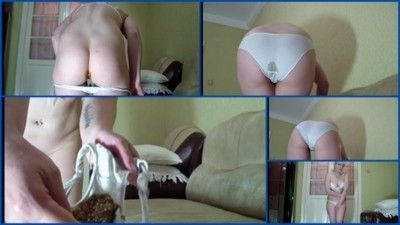 Good afternoon, my dear fans. I am on vacation on lake Baikal and as I promised I will introduce You to my adventures along the way. I went by train for three days, it was boring and I really wanted to play pranks. So at one of the long stops, the slave girl and I went for walk. There was a Park near the station and I wanted to pee. The dirty thoughts popped into my head and I lifted my skirt, turned my back to the slave girl and piss standing up. Powerful jet hit the ground, and I almost peed all over my jeans, but what satisfaction this little prank was. In one of the hotels on the way I was bored in the evening and I decided to take a shit with my feet up on the chair. This You will see. At the same time, I had to be very quiet, because walls were very thin, almost cardboard. I took a good shit and went to bed with sense of accomplishment. I got diarrhoea at the hotel and took a shit in the bathtub. I was standing up to my ankles in shitty water and the smell of shit filled the air, it was like this wonderful

126197 - The bodies of three friends are all covered in shit

Three friends Caroline Alice and Yana decided to arrange a toilet show for you . The girls decided to use balls in this video to smear shit on their bodies . The first one whose body was smeared with shit was Karolina, Karolina lay down on the floor and Yana sat down in a comfortable position and shat on Karolina's body. After that, Alice and Yana used balls to smear the shit on Caroline's naked body . Caroline was covered in Yana's shit , now it's Alice's turn, Caroline shits and pisses on Alice's naked body and Yana and Caroline also smear shit on Alice's Tits and pussy and Caroline's shit with rubber balls . The third was Yana now Yana is lying on the floor and Alice is shitting and pissing on Yana's naked body . After that, Caroline and Alice smear the shit on Yana's body with balls . Three girls and their bodies are all in shit, Yana Alice and Karolina were happy with this game with the help of balls .

Yana Alice and Caroline decided to arrange for you a nylon show in which girls shit and piss in their nylon tights . In this video, Yana Alice and Karolina decided to have a little fun and arrange first a small Striptease for you in nylon tights , and then fill their copra tights with shit and urine . At the beginning, the girls take turns showing you their pantyhose, in a light Striptease , then each of the girls takes off her pantyhose Baring her ass, shows you a clean white ass , then puts the pantyhose back on her ass and starts filling her pantyhose with shit and urine . After filling, each of the girls again take off their pantyhose and show you their ass which is very dirty from shit, after the demonstration, the girls again put the copra tights back on their Asses .

It has been a tough week, so this woman gets herself an extensive relaxation service! Naked, she gets oiled and massaged all over her body and then later gets her asshole rubbed while her vagina is being stimulated with a vibrator! However, she gets a little bit too relaxed as she then couldnÂt help stop herself from pooping! Streams of feces come gushing out of her rectum! She even later bends over as she continues to let chunks of poop come out of her asshole! The only time she is able to stop is when there is nothing left for her to defecate!

ItÂs bright outside and i want to take shit in the sun! Watch me squat down and spread my cheeks just to show you my pretty asshole pushing out creamy shit for you&#128578; mmm..it's delicious treat!

I wear jeans on my big ass. I'm starting to shit right in my pants. soon my pants are full of crap. I take off my pants from my ass and start spreading my ass shit. all in the shit. really stinks. I am pleased with the result. 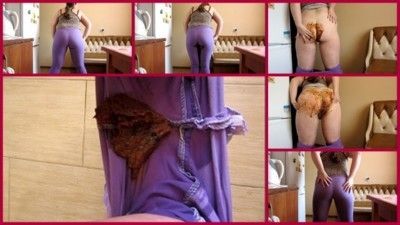 Another clip with Goddess Roberta, one of the best scat Dommes from Romania ! In the first part she loves to play with her slave, teasing him with her tan pantyhose. She allowed her slave to stroke his cock while he sniff her pantyhose, lick them and clean them. In the second part, she use her toilet chair to relax while her toilet must swallow all her piss and diarrhea. She poop in her pantyhose then she order her slut to destrpy them and colect her diarrhea in his mouth, chew it and swallow it ! She loves to see her toilet dirty from head to toes, so she puts some gloves and smear her diarrhea on his body, face, mouth. A great dirty clip for scat fans !