At this point, the woman gets off the guy but only to take off her panties and start urinating into his mouth! This left him with no choice but to gulp down every last drop! She even came prepared with a full bladder, resulting to a nonstop stream of piss! But she eventually could no longer release anymore, by then, she proceeds to defecate into his mouth! He chews and eats her poop since he doesnÂt have a choice, but as fast as he tries, he couldnÂt keep up! Some of the womanÂs poop lands all over his face! To make things worse, when the lady is finished relieving herself, she directs her attention on smearing her poop all over the slave, further creating more mess!

How I shat today. At first, I pushed, trying to push the shit plug out of the hard shit. Then I sat and waited for the semi-soft shit to come up. Shetting up, I already thought, everything, with the relief of me, but no. After 5 minutes, I was pinned, and I wanted to shit. I didnÂt have time run to anywhere and i shit right on the floor in the middle of the room. Phew, what a relief. Fuck, only now I have to clean up all the shit with hands.

Watch me tease you with my ass, smell it , taste it , curry your face in it . Then I strip down.. finger my ass, make you clean it off .. Then produce a meal for you to consume and clean up . DonÂt forget my asshole .

You're bound to my ruined panties,there is no escaping addiction. You need my messy full of shit panties more than anything, and you will be on your knees worshiping me forever.You need to belong and have a purpose. You are mine and only mine forever. Always ready to worship, always ready to stroke for me.

Watch Nalina dressed up as a dirty whore sucks poop in a plastic bag, and as a filthy scat whore does, starts sucking her fresh poop, and swallowing some...That whore loves shit!!! 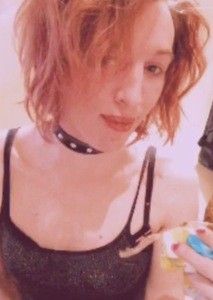 On the surface, this woman looks innocent, but she actually hides something underneath! She is a dominatrix and during her free time, she has a lot of one-sided fun with her unfortunate boyfriend slash slave! This situation is no different! She has been at home and has nothing to do, so what better else to spend her time on but to have the man drink her piss!She puts the guy underneath a contraption which she gets on top of and begins urinating! The device funnels all her piss into his mouth, making sure to have him drink every last drop! The worst part is that she has come prepared with a full bladder, so she keeps on going and it seems like there is no end to her pissing! Eventually, she could no longer release anymore, but she simply repositions herself and starts defecating into the guyÂs mouth! With every chunk she pushes out, it drops on his throat and he is left with no choice but to chew and swallow! She manages to keep on releasing more and more with every passing second, and there is nothing he could do but to keep on eating!

Skinny Tarah strips off, bends over and shows her tight asshole. then squats and pushes out some nice shit on the floor. She sexy talks throughout video.

Watch me shake my ass.. Then poo into a clear bowl, after i poo in the bowl I stuff and squeeze it between 2 cookies. . Then give you directions on whatÂs next ..

Watch me on my back .. I decide to tell you what a filthy fuck you are and make you beg to be my toilet slave .. once I shit i piss everywhere and you know what to do with it .

Are you waiting longingly for new feeding instructions from your mistress? Well then watch and listen. You know which slaves I prefer? Only the ones that eat and not steal my time. So, open your mouth, eat my shit.

Watch Nalina dressed like a dirty whore, poop in a bag and put it straight in her mouth. She then starts sucking her poop. I you like dirty messed up sluts, you will enjoy this one ;) 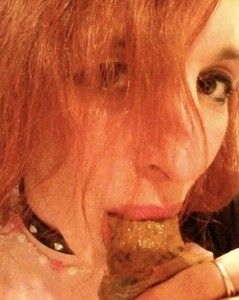 I was nasty & sadistic with my toilet slave in this one. Not having a care in the world for itÂs discomfort & suffering.It was a two day load so I took a GIGANTIC shit right into itÂs mouth. As it should be I received double pleasure in this one. The pleasure of taking such a massive shit into itÂs mouth giving my colon the aching release it needed. Right after that I sat down on it, smiling down at it and even laughing at it as I watched it suffer while it was swallowing my horrible stinking shit. The very same shit that felt so amazing, sliding out of my ass. Even as it blew bubbles through my shit while swallowing it I show no mercy. It has no choice but to keep swallowing my shit, seeing me smiling and laughing down at it during itÂs suffering.I even took my time smearing itÂs face and neck with my shit while telling it that itÂs my little shit eater. As a woman it is so empowering to turn a man into a toilet and watching it suffer eating your shit. I am one happy and satisfied Goddess indeed!In part two I sit down on the toilet and push my slaveÂs head in between my legs so his face is past my pussy right into the toilet bowl. Between my ass crack at the back and his face in the opening in the front itÂs a proper seal.Now I can moan and sigh in pure pleasure and delight from letting those loud and horrible smelling farts out and trapping them right in the toilet bowl with my slaveÂs face. This ensure he has to smell every last drop of my terrible fart stink while I only smell the fresh open air.Pretty soon my farts turn really wet and messy in there as I start to shit as well but I show no mercy. I could feel the soft and nasty smelly turds slowly curling out of my little asshole into the toilet bowl while I was farting. I know.....it's rude to push someone's face into your toilet bowl and keep it there when you accidently start shitting. He suffered so much you can actually see the back of his neck and head breaking out into a cold sweat haha DonÂt miss this amazing compilation from my best sellers.Be sure to check out all my other intense and kinky clips! xoxo

Part 2 of today's serious flow of runny poop, piss and release...All I need now is some loyal toilet slaves and fans to reward in more graphic detail - is that you? Come join my fan club and message me to tell me what you'd love to see next 😘❤️

Today was a serious flow of runny poop, piss and release... All I need now is some loyal toilet slaves and fans to reward in more graphic detail - is that you? Come join my fan club and message me to tell me what you'd love to see next 😘❤️

3 July, my birthday! Look at how I wanted to spend my day this year, in the dungeon at Mistress Andreea. I resumed the collaboration with an older friend of mine, a sadistic Ggoddess, and in the next 4 episodes you can see how hard and sadistic she is! Episode 3 - facesitting and hardcore ballbusting with toilet Faith. Then she feed him her kaviar in bathtub and smear her shit on his face. Clip recorded from 2 angles with smartphone and GoproMax.