My two toilet sluts have finally met. At first, they were shy, wary of touching each other. As if they didnÂt believe they were real, that they both dirty toilet bitch. But after while, relaxed and began communicate freely, get used each other. After dirty sex, scat party, I drove them both into the bath and ****** put each other enema. They put the hose in the ass each other and jets of dirty water with shit flew out on them, lying on their faces and on breasts. They made faces, posed, enjoyed their perversion. They washed, washed off the shit, soaped each otherÂs bodies, enjoyed touching. Soapy, foamy, but with dirty faces covered in shit, they giggled and laughed happily. Till last moment, they did not want wash their faces, they liked that their faces are covered in shit, that they could smell shit. It was so erotic, so sexy. I was just exhausted with desire and excitement looking at these dirty sluts

Ooooh Nooooo.... I played for way too long with my giraffeies. But that's why my daddy bought me my plastic panties to wear. Wow, what a mess, all smelly and sticky.

I'm starting to shit. my holes are seen in close up. You can clearly see how the shit comes out of my ass. I'm lying right on the floor. I spread shit on the ass and pussy. really stinks. my body is all in shit. 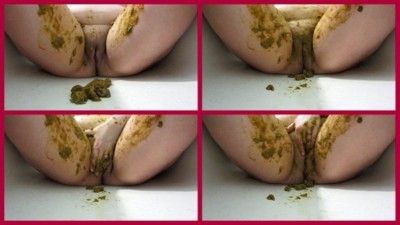 I propose to watch my video, I'll poop, I'll shove my pen in the anus and after that I also want you to see my dirty ass, well, and lastly, I'll blink my anus at you

In this video I left my slave without eating for almost two days, I wanted to see him eat my shit willingly. I'm training this loser, I think it's time to get heavier. because here I put limits and not the slave.

Hot Trix strips off showing her amazing body, then from behind she does a shit on the floor, as she was not happy with that shit, she shit a bigger one second time round.

Hey there again... Hope I can interest you in a naughty showÂ &#128521; YouÂre allowed to watch, but youÂre not allowed to touch! I reverse cowgirl on feet then knees on my realistic suction cup dildo, winking my pert little butthole above my cock-taking pussy from time to time to tease you &#128521; Look how my plump big ass shits on that dick and shit slowly flows down your ballsÂ Mmm, it's so sexy, don't you? I know your dick is hard and itchy in your pants &#128521; I taunt youÂI bet you enjoyed that, didnÂt you? You like how dirty my ass? Do you wanna fuck my shitpile, babe? &#128521; Go on, stick your dick in my shit, and fuck itÂfuck it more intense. Come om, worm...

I piss in the mouth of my inferior toilet slave, he drinks everything quickly, then I shit. Some chunks fall on the side of his toilet face, so I put on some rubber gloves and hand-feed him my delicious shit in his mouth, he sucks my fingers and swallow everything, as you can see in this very clear high-quality clip! Hmmmmm delicious!!

All started with me that i need very very bad to poop , well i was very sure to shit its about to come out and i poop a huge logÂ.and after that i was surprised of a big explosion enema hahaha &#128512;

I barely had time run to bed and lift my legs when the morning shit poured out of my ass. This happens quite often. After breakfast, I immediately start want to shit and only have time running to the toilet or press my ass to the mouth of toilet slave. Look at the soft, warm, fragrant shit today. Do you want taste it?

Let's face it: The reality of you worshiping my ass is ... filthy. This is where poo-poo comes from and all men want to do is obsess about my perfect, fat booty! Let me show me the difference between fantasy and reality you little toilet wannabe. Follow along with my sweet voice, feminine curves and stinky star fish as I push the reality of toilet worship out of my bum and into your face!

Another epic clip in which the master humiliates his toilet slave in the lowest way. He pees in her mouth, in a public toilet, then makes her throw out everything fom her ass. The slave manages to have diarrhea and then is obliged to eat/ingest everything and vomit/puke. An extraordinary kinky and dirty couple, who accept any bizarre fantasy. You must have this movie in your personal collection !

My friend BBW saw movies with my shit eater. She also really wants to fill the slaveÂs mouth with shit. Getting up early in the morning, she decided to film her shit on video. Her huge ass fills the entire screen, she got ready, bent down andÂ powerful fart, shit bullet flies out of the ass, plentiful stream of diarrhea spills out after. Yes, pity this shit didnÂt get into the slaveÂs, not on his face, he choking have swallowed this stinking diarrhea and would have been unspeakably happy. Warm, smelly soft shit, she takes it in her hands, smears her huge tits and lures, beckons. Come to her, toilet mouth, eating her juicy shit day after day

Huge fresh warm nutty vegetable shit comes out of a huge juicy ass!There is a loud bang, shit on the floor, which means the mission is complete! But how about experimenting? I take huge chunks of shit in my mouth, smear my own shit on my face, inhale this scent, dive into the shit and stuff it in all my hot and humid places but... (thoughtful emotion) how about fucking yourself in the mouth with a toothbrush and brushing my teeth with my fresh shit? Finally, I'll add some strawberry syrup so you can taste the unique combination of sweetness, saliva, and of course my mouth-watering shit on your face *rofl* Just buy and watch that mess 8D

I wake up in the morning and very often I want to shit right away. This time, I'm shit straight onto the floor, wiping my ass with toilet paper and showing off my messy asshole and pussy.

In this little clip you can see Kiwi trying to make her very first scat clip ever. She's barely 18 y.o. and her try ends with a great quality clip, with a very good ass and soles pose but a very very small shit. LOL. Very cute though. (1:20 mins) *Â©BP exclusive.